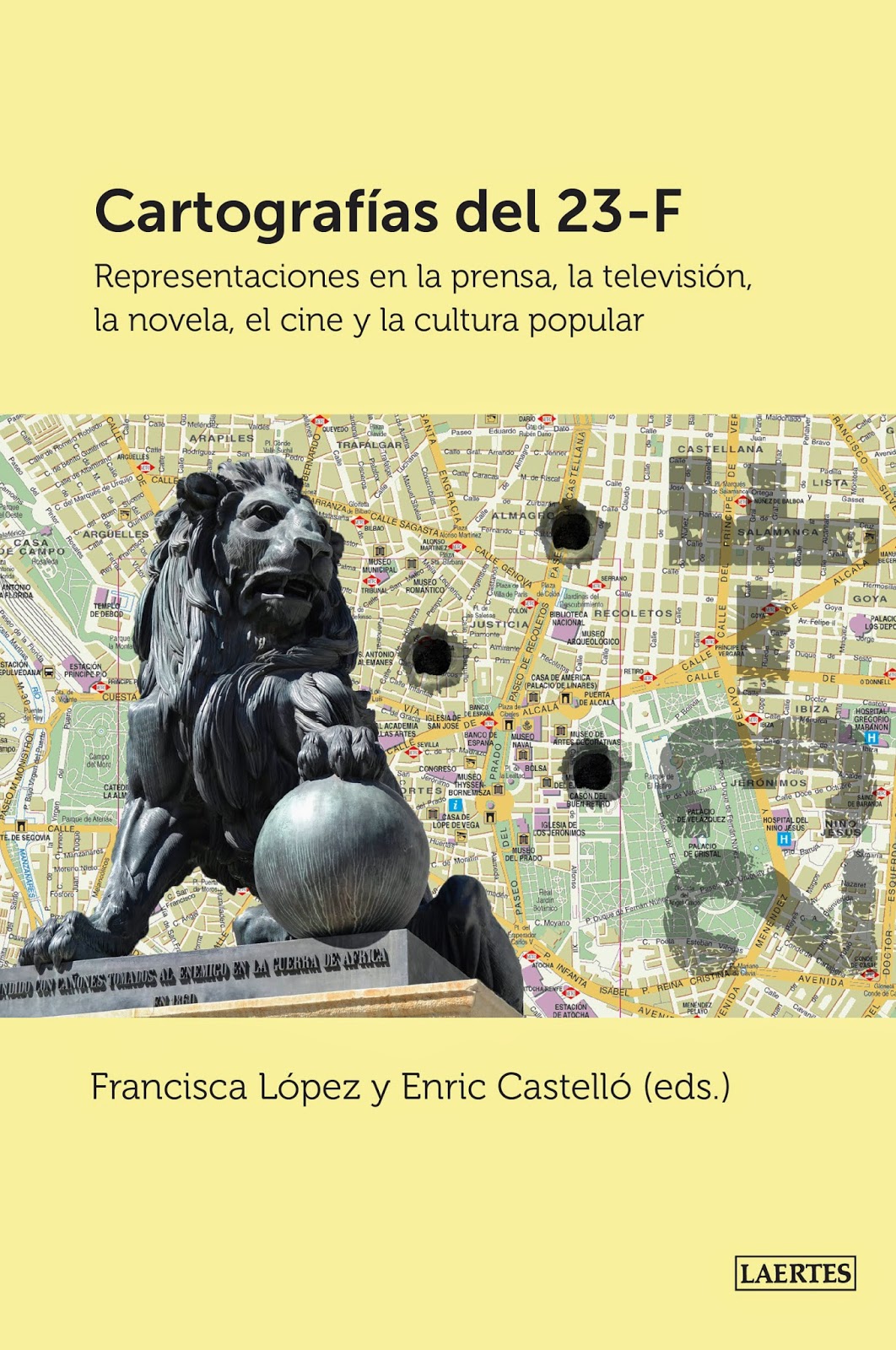 Cartografías del 23-F.  Representaciones en la prensa, la televisión, la novela, el cine y la cultura popular.  Laertes (Barcelona), 2014.  Edited by Francisca López and Enric Castelló.
On February 23, 1981, when Colonel Antonio Tejero and a band of armed men stormed Spanish parliament and sought to instigate a rebellion against the democratically elected government, the future of Spain stood near the precipice of the past.  Nearly three and a half decades later, however, the question that comes to mind pertains not so much to what actually happened during the two days of the takeover of Parliament (much is known about the facts of the incident) but rather what did it mean to the fledgling democracy still seeking to define its identity and affirm its legitimacy. As Francisca López and Enric Castelló remind us in Cartografías del 23-F, the traditional story of F-23 has generally been seen as a straightforward morality play: an attempted coup; a king who demands loyalty to the government; surrender of the rebels; a return to order.  Spanish democracy had been saved.
But of course the story of F-23 is not really quite so simple, and the essays collected in Cartografías point clearly to its complexity. The impetus for the collection lies in the editors’ desire to move beyond the prevailing conceptualization and political use of F-23 as “una especie de rito de pasaje nacional y mito de origen, para bien o para mal, de la democracia actual” (23).  However, the event itself has not served as a constant and nagging component of the nation’s collective memory of the fragility of democracy, as perhaps might be expected.  Both the stories of F-23 and interest in those stories have changed over time: strong initial coverage during the early 1980s, a general diminution in concern over the next decade and a half, followed by the anticipated increase in interest in 2006 (the twenty-fifth anniversary) and a somewhat surprising resurgence in 2009. Cartografías examines the nature of the diverse representations over this period of time that have appeared in a range of formats and texts:  documentaries, television programs, movies, and narratives of various genres.
Cartografías is divided into two sections. The first part, “Informativos y documentales,” explores works that would generally be seen as pertaining to non-fiction genres.  Four essays in this section efficiently cover the facts as well as the controversies. Arantxa Capdevila’s essay, “La disolución de un consenso: el 23-F en la prensa,” is particularly helpful as a diachronic summary of press coverage of the events surrounding the attempted coup, and serves as well as an overview of the many issues examined in other parts of the book: how the major actors in the drama of F-23 have been portrayed over the years; how the events of those days have acquired value and represented ideals at once embraced and rejected by the nation; the process of constructing F-23 as both current event and historical discourse.
The remaining three essays in this section are equally useful, but with a different focus in each case:  Hugh O’Donnell examines coverage of F-23 in the English-speaking press from around the world (short-lived interest internationally, with the event itself quickly mythified into the binary of the good (the King) and the bad (Tejero); José Carlos Rueda Laffond explores television documentaries that use footage from Spanish National Television during the takeover, which played a key role in the creation of the democratic origin myth; Enric Castelló, in an excellent piece on historical documentaries produced by television from the autonomous regions of Spain, draws out many points of divergence between the local perspective on F-23  (a much more nuanced view overall) and the hegemonic discourse generally created and embraced by the national media.
The second section of the book (“Novelas, ficciones y cultura popular”) covers various forms of fictional representation of F-23. Francisca López begins this section with a comprehensive overview of narratives (“novela, casi novel o crónica novelada” [145]) written about the events surrounding the coup from the 1980s through Javier Cercas’s hybrid Anatomía de un instante, published in 2009. As López ably demonstrates, no single truth can be found at the root of F-23 in these fictions, as both myth-making and its deconstruction sustain various aspects of fictive narrations throughout this thirty-year period.
The remaining three essays of the collection explore television programs of various types related to F-23. Ruth Gutiérrez Delgado and Sira Hernández Corchete examine two popular mini-series shown on Spanish television, 23-F.  El día más difícil del Rey and Historia de una transición, and explore how they relate to the already existing perceptions of the events reported through television coverage and documentaries in the past. The divergence between fictive narratives produced immediately following F-23 and those from the past five years forms the basis of a very fine essay by Concepción Cascajosa Virino and Vicente Rodríguez Ortega, who also underscore how some of the most fully contestatory texts to the national myth-making of F-23 appeared at unexpected moments of the Transition. Finally, Laia Quílez Esteve’s piece on F-23 as portrayed in three contemporary films (Muertos de risa, 1999; El calentito, 2005; 23-F:  la película, 2011), reflects on how film may be used ethically and aesthetically to shape the popular understanding of history.
The editors’ intention in putting together this collection clearly was not to bring to light unknown facts pertinent to F-23, but rather to show how the events associated with it have given rise to a large body of works produced from multiple perspectives and with diverse and contradictory meanings. Certainly, for many Spaniards F-23 stands less as a moment experienced than as an event discovered in a text or viewed on a screen.  And here precisely lies the importance of the collection: it engages history, to be sure, but above all it engages representations of history and the various mediating discourses that shape it.  The insights provided into these representations prove to be both satisfying and useful throughout Cartografías, and will no doubt help readers understand not only the Spain of 1981 but also the Spain of today.